by mert in Metabolic Health

The diagram below details how overfeeding will lead to the so-called metabolic syndrome, a cluster of conditions that are linked and can lead to vascular disease, stroke and heart attacks.  The components of  metabolic syndrome are hypertriglyceridemia, truncal obesity, hypertension, diabetes and low HDL.  This diagram elaborates an insulin-centric model, and it’s important to recognize that there are other models.

The overfed state means the cells of the body–primarily muscle, which accounts for 80% of the body’s glucose disposal, and adipose tissue–have been overwhelmed with fuel and become overstuffed.  Insulin is an important player in this schema because glucose transport into muscles requires insulin to get nutrition into the cell.  When the cells are full, they reduce their expression of insulin-dependent glut4 transporters, making it harder to push glucose into the cell.  This resistance can be overcome by manufacturing more insulin, which is how to body initially responds to the problem of rising glucose concentrations in the extra-cellular space.  Imagine insulin to be the hose pressure pushing gas into the tank.  The more stuffed the cells are, the more insulin you need to drive nutrition intracellularly, and this is precisely the phenotype of insulin resistance.  The pancreas is the hose pump in this analogy, and with prolonged pressure, it can fail leading to diabetes.

Meanwhile glucose that should be going into the muscles and fat cells overflows from that compartment and is instead taken up by the liver in an insulin-independent process.  In the liver, glucose is converted to saturated fat through de novo lipogenesis, ultimately leading to non-alcoholic fatty liver disease (NAFLD), which can progress to cirrhosis and ultimately liver failure.  NAFLD has become the leading reason for referral to liver transplant centers.

Meanwhile, the very high circulating levels of insulin cause sodium retention in the kidney, creating salt-sensitive hypertension.  At the same time, insulin acts more broadly as a growth factor in the body, and high levels of circulating insulin are associated with accelerated cell division and carcinogenesis.

This schema is the backstory of the American healthcare system.  An ever rising percentage of patients in any emergency department have hypertension, hyperlipidemia, truncal obesity and diabetes. 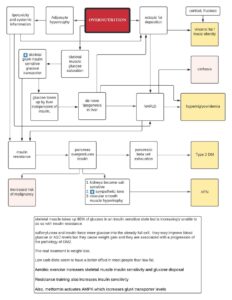