Why Nature Wants Us to be Fat by Richard Johnson 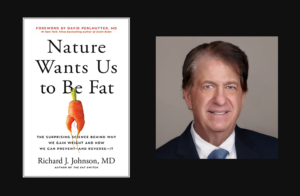 The two popular theories that purport to explain the obesity pandemic are the carbohydrate insulin model and the standard model of energy balance.  In Why Nature Wants Us to be Fat, nephrologist Richard Johnson bravely proposes another theory:  the survival switch.

In his formulation, nature has evolved a survival mechanism allowing organisms to rapidly gain weight in preparation for periods of scarcity.  It is meant to be turned on occasionally in response to adversity, but our food environment has interacted with our evolutionary biology to turn the switch on continuously, leading to widespread obesity.  The survival switch is most consistently activated by the molecule fructose, and Johnson pins much of the blame on pervasive consumption of high fructose containing foods and beverages which were introduced in the 1970’s.  Fructose metabolism triggers an intracellular starvation type response in the liver that ultimately leads to leptin resistance and diminished satiety, which then causes persistently disordered appetite.  Fructose causes obesity not because of its caloric or nutritive value, but rather by hijacking appetite.  Sucrose too is implicated, as it is broken down to equal parts fructose and glucose.

The book impressively draws from biochemistry and clinical science as well as comparative biology, evolutionary science, bio-anthropology and paleontology.  According to Johnson, a classic example of the survival switch is mammalian hibernation.  To take that example, in preparation for winter the bear markedly ramps up its consumption of fructose-containing blueberries in order to build fat stores, which become a source of both calories and water during its hibernation.  Similarly, birds often switch from insect diets to fruit and nectar-filled diets as winter approaches in order to gain fat.  In this way animal and fruit-bearing plant life are in seasonal harmony.

In the absence of fructose, other stimuli such as high salt, dehydration and umami (glutamate) can also trigger the survival switch by pushing conversion of glucose to sorbitol and then to fructose through the polyol pathway.  Animals are drawn to salt-licks for this reason, the salt triggers the conversion of glucose to fructose which helps them put on weight. To the extent that ultra-processed foods are formulated with high concentrations of salt and sugar, they are continually triggering this metabolic switch on a global scale.

This is a fascinating book by a researcher who has stature and standing in the field, but his identification of the survival switch as the cause of the majority of  maladies afflicting mankind gives pause.  The author may be extending his conclusions too far.  Yet the theory is cohesive, supported by empirical evidence and powerfully explains much of our current predicament.  I am swayed.

Muscle is a metabolically active tissue that plays a central role in health and longevity.  Beyond helping one get up from a chair and avoiding falls and hip fractures as we age, muscle accounts for 75% of glucose disposal and makes the greatest contribution to resting energy expenditure of any tissue in the body.  For these reasons, we need to be mindful of preserving our muscle mass, particularly if we are to age well.  Sarcopenia (from the Greek “loss of flesh”) can be a tremendous burden on geriatric populations and is the leading cause of frailty and deterioration.  What follows is a discussion of muscle metabolism that owes a debt of gratitude to a recent podcast by Peter Attia with the food scientist Don Layman.

The main drivers of muscle synthesis and retention are protein intake and resistance exercise.   But  what kind of exercise?  And what kind of protein?  And how much?  And when?

Not all protein is equal.

Another way of looking at this issue is to consider the essential amino acid leucine, which is a relatively muscle-specific activator of mtor.  Insulin on the other hand activates mtor in a range of tissues.  What this means functionally is that people who eat a lot of small carbohydrate meals, each of which leads to the secretion of insulin, continuously activate mTOR and drive anabolic pathways / aging across tissues.  This is probably the worst-case scenario and a real justification not to snack.   On the other hand, infrequent / periodic high protein meals with large leucine loads will stimulate muscle growth while reducing broader mtor activation associated with snacking.  Does this mean there is no role for carbs in the diet?  Of course, not, but that is a matter for another time.

Timing of protein consumption—is it better to spread your intake across the day or consume the bulk of your protein in one or two meal?

Protein as a diet food

Protein use / reversing catabolism with age

Other considerations for sarcopenia