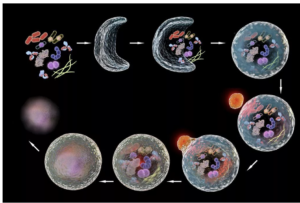 Autophagy (literally “self-eating”) is the body’s way of cleansing cells by recycling old or damaged components and is a process that appears to have a strong relationship to preventing disease and aging.  More technically, it is a highly regulated lysosome-dependent catabolic program used by the body to clear dysfunctional proteins, organelles and other structures that are typically first marked for the process by a protein called “ubiquitin.”  Primarily intra-cellular but also extra-cellular components are engulfed in autophagocytic vacuoles and degraded to constituent molecules, such as sugars, fatty acids and amino acids, which can be then be used as nutrition to produce ATP and/or provide building blocks for the synthesis of essential proteins.   There are different types of autophagy but for the most part they all serve this same purpose.  Mitophagy is a similar process that removes damaged or dysfunctional mitochondria.  There is also nucleophagy of material in the cell nucleus.

A number of types of autophagy are currently described. 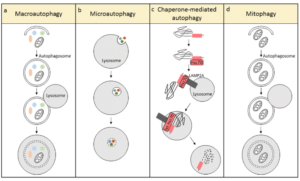 Why is it important?
Autophagy is critical to cell function, regeneration and keeping the cell working properly.  Inhibition of autophagy by knocking out any of a variety of autophagy related genes invariably accelerates aging and disease.  Similarly, with aging, autophagy is downregulated (particularly in lymphocytes) leading to a forward feeding loop of accumulation of cellular debris and cellular dysfunction / dysregulation.   In contrast, enhanced autophagy delays aging and prolongs lifespan in a range of model organisms including yeast, nematodes, fruit flies and mice.  Lifespan studies in humans have not been conducted given the obvious challenges in conducting experiments in long-lived organisms, but it is generally assumed that regular induction of autophagy is a salubrious process, something we want to promote.  So how to do so?

How to promote autophagy?
First the biochemistry–skip ahead to the punchline if you prefer.  ULK1 is the enzyme that catalyzes production of phagosomes implicated in autophagy.  AMPK and SIRT activate ULK1, MTOR deactivates it.  If MTOR1 is inhibited by rapaymycin or starvation, autophagy is activated.  TFEB is considered the primary transcription factor for the synthesis of both lysosome and autophagosomes.   Again, AMPK boosts the activity of TFEB while MTOR inhibits it.  Spermidine, which declines with age, is a required co-factor in the translation of TFEB, so its supplementation is theorized (and shown) to stimulate autophagy.

Simply not eating for a few hours and reducing nutrient levels in the blood starts the process of autophagy.  This is the rationale for time restricted feeding.  Starvation for longer periods such as two- or three-days initiates chaperone mediated autophagy, a targeted deep clean that modulates diverse functions such as glucose and lipid metabolism, DNA repair, cellular reprograming and the cellular response to stress.

Can there be too much autophagy?  Perhaps yes.  While normal or even supernormal levels of autophagy promote cellular health, excessive or uncontrolled autophagy can initiate a type of cell death known as “autosis” (https://www.nature.com/articles/cdd2014143).  While autophagy is believed to be helpful, cell death through autosis is inarguably harmful and to be avoided.  The clinical significance of autosis in the context of therapeutic autophagy is not clear.  I reached out to Beth Levine, the woman who did much of the original research on autosis but her email bounced back and it turns out she has tragically died of breast cancer.  In any case, in this setting of incomplete understanding, the best course is one of prudence and moderation.  In the words of Hippocrates, first do no harm.  Practically speaking, my policy is to cycle agents, to avoid excessive dosing and to carefully follow serologic markers during treatment.

Relationship between autophagy and weight?
There is an emerging understanding of a relationship between autophagy in the medial-basal-hypothalamus (MBH) and obesity mediated by the FK506 (tacrolimus) binding protein FKBP51, which appears to be a major upstream regulator of autophagy.  Could autophagy and more broadly, the intracellular environment in hypothalamic neurons be the functional memory that induces phenomena such as the physiologic set point?  Could agents that augment autophagy such as rapamycin reset the physiologic set point in humans, as it has in mouse models?  These are intriguing questions.